~I will say, UL power does a fantastic job of laying out the scheduled maintenance in a way that is easy to follow and understand. However, there are a couple annoying tasks that exist only due to the design of the engine. Instead of going over the tasks clearly marked in the maintenance manual, I will be touching on the items that have come up unexpectedly, not only for myself but as reported by others.

~A former UL Power owner seemed to have the worst of luck with his engine. For some odd reason, his prop flange teeth were wearing down as if they were made of clay. In fact, after changing out his flange 3 times, he finally gave up and just sold the engine. UL Power told him that the prop flange bolt torque was sufficient enough, that the flange teeth weren't needed. But 3 flanges wearing down was just too strange. The cause of this wear is a mystery still. Could his prop flange bolt have been under torqued and loosening? Was it a quality control issue as he believed? I really feel bad for this guy and can't say I've heard anyone else having these flange issues. Either way it's something that can easily be detected during the first 50 hours, as the manual states to re-torque the flange bolt a couple times to ensure is stays put. Why UL Power doesn't use a 1 piece forged crank/flange is beyond me. The technology is there.

~Back when I first bought my engine, part of the sales agreement was to include a custom ECU fuel map specifically designed to work with my exhaust pipes which I had custom made. This required sending the exhaust off to Belgium for a custom tune. Needless to say, this was the beginning of a huge headache. The first ECU tune came back and the engine was sputtering and stuttering on throttle up. This cause me to have to send my pipes and ECU back to Belgium for a second tune. The second tune came back just as bad as the first, and UL Power would not admit that the tune was a problem. Finally, a 3rd time I sent the pipes and ECU back to Belgium, where they ordered a constant speed prop to simulate my high pitch prop and found the problem to be related to the acceleration values in the mapping. Up until then, almost all UL Power engines were being installed on fairly slow aircraft, so loading the engine with a high fixed pitch prop changed the dynamics of the needed fuel delivery considerably. Still, UL Power blamed "me" for throttling up too quickly and said most pilots never do that. This coming from a company made of race car drivers and not pilots who have never had to go around on landing due to an emergency. We pilots shove the throttle forward quickly all the time. Well, for the last year, the "current" tune on my ECU has been adequate, but no where near perfect. And I can't forget to mention that this special tune they agreed to as part of the sales price did not come free, but ended up costing me in the thousands....ya.
Here's the fun part. Recently, I've been made aware that this sputtering and stuttering issue was more widespread than thought. So much so, that UL Power decided to update everyone's ECU here in the states to solve the problem. While I'm glad I got to be the squeaky wheel that brought on the updates for all UL Power owners, having to fork over the cash to get mine right shouldn't have happened. Especially after I was told that my custom exhaust really had nothing to do with the issue in the first place, but rather a choice of cruise prop. Either way, I highly recommend to all current and future UL engine owners, to make sure UL Power supplies them with an ECU tune specific to their mission. You don't want to be grounded multiple times, for months on end like I was. Dont' let anyone smooth talk ya into thinking it was an isolated issue. Demand an accurate ECU mapping in writing and good luck!

(The following article includes personal recorded testimony from UL Power engine owners. All specific technical information concerning the information below can be found in published literature by the parts manufacturer (Not UL Power) and confirmed via professional engine builders who have years of experience with the parts mentioned, and are known internationally in the automotive and aviation community. This article does NOT reflect the opinions of UL Power in any way)

~I have owned 2 UL Power engines and speak to UL Power engine owners on a weekly basis, helping them with various issues they have. One that has been coming up that has really got my attention is piston slap. Piston slap can be caused by several things, but only when someone is willing to tear down an engine and find the root cause, can a solution be found, which is exactly what I did to investigate this wide-spread issue.
A simple borescope has revealed on both engines I have owned, that the pistons inside the UL Power engines are causing severe damage to the cylinder walls, and it's not just a rare occurrence. Many engine owners have also performed a borescope to find cylinder wall damage, which leads to burning oil, low compression, or worse. In my personal experience, my latest engine, the 520iS, has now had to have both cylinder #5 and #6 replaced with all new pistons and rings. The worst part of it all is that UL Power was willing to replace, under warranty, #6 piston and cylinder without question, but then denies responsibility and refuses to cover these identical damages for cylinder #5. In fact, UL Power representative Robert Helms posted about my damages on open forum stating, "...we won't give him a replacement part for a part that isn't even broken." He then later deleted the post, but not before a fellow UL Power owner had the chance to screenshot the statement. So now that the cat is out of the bag, let's find out why this is happening to so many UL Power engine owners.
When the factory new cylinder and piston arrived from Wicks, I had them measured and found that the cylinder bores were anywhere between 4.155 and 4.158. Talk about sloppy! Now, UL Power uses Keith Black KB128 Cast pistons in their engines. These pistons are widely known to be very finicky and many engine shops won't use them when building engines for this very reason. One shop owner I interviewed, with over 30 years experience, tells me he wouldn't put these pistons in anything and has seen them fail on multiple occasions. The KB128 pistons are hypereutectic cast aluminum, which alone isn't bad, but used in an aircraft engine is risky business. Harley Davidson owners talk about the use of these pistons, and state that they also have a history of piston slap when the piston to wall clearances are set to ANYTHING over .0025". Harley owners who have set the clearances to be higher than .0025", have experienced the same piston slap and damages, that UL owners are experiencing . It should be noted that both, Harley Davidson and UL Power, have an almost identical range of operating CHT limitations, which directly correlates to the required piston to wall clearance requirements. Why UL power chooses to use a .0035-.0055" clearance that would be expected for a forged piston, makes no sense to any of the engine builders I interviewed. One shop owner stated that using larger clearances above .0025" would be suitable for a forced induction engine, but absolutely NOT for an engine that is N/A and using pump gas. He then pointed out that the piston manufacturer makes this clear in their documentation.
So how should UL Power owners deal with this issue? Well, the best solution would be that UL Power changes to a better aircraft worthy forged piston, with proper clearances. In fact, changing the clearances would not only be extremely easy to do, but more importantly, be within the manufacturers guidelines. In any case, this is a UL Power problem that must be addressed. One of the photos below comes from an engine that experienced all of the symptoms mentioned, and unfortunately ended in a terrible crash. Owner, Steve Kemnitzer talks about his experience in detail, from beginning to end, after he and his passenger were almost killed. Another 520iS owner, Paul Price, says, "I have lost all faith in UL Power", who recently had an emergency landing after a total engine failure which, he claims, UL Power wrongfully blames him for user installation error.
If you currently own a UL Power engine, take a look inside your cylinders through a spark plug hole, and see if they look similar to the images below. If so, contact me immediately. I am currently working on an affordable solution to this problem for current UL Power owners who are experiencing these issues. I sincerely hope UL Power will address this problem by either following the manufacturer's guidelines, or better yet, using a much higher quality piston, with proper clearances. 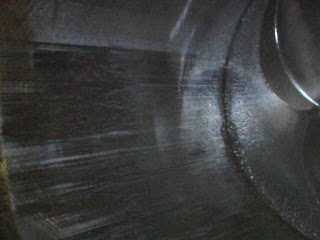 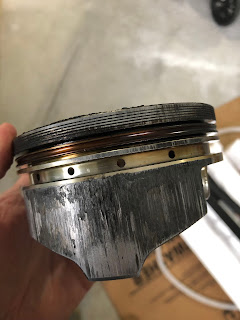 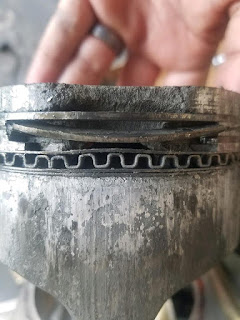